“This is a thriller that satisfies on a number of different levels.” – John Paine 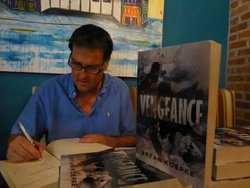 On a cold January morning Reece Culver gets a visit from a woman seeking answers to the mystery of her mother’s disappearance. Intrigued by her story he agrees to help and soon travels to the mid-west to search for clues. Not long after, it becomes obvious that someone doesn’t want him snooping where he doesn’t belong.

While visiting his client’s childhood home he’s jumped, beaten, and left for dead. Several days later he sits chained to a table in the interrogation room of a St. Louis Police station charged with murder. Reece figures out that the case he’s investigating and an unsolved murder that has haunted him his entire life are linked.

In a desperate race to catch the killer before the FBI offers this perpetrator immunity Reece dodges multiple attempts on his life and seeks the answer to a single question.

Can he stay alive long enough to solve the mystery and put the murderer behind bars?

“For being a debut novel, Bryan Koepke’s VENGEANCE manipulates the usual ingredients for a thriller – revenge, betrayal, and redemption – in such a forceful way that once started it is difficult to set the book aside for fear you may forget an occult clue Koepke has just dropped in our psyche.” – Grady Harp HALL OF FAMETOP 100 REVIEWERVINE VOICE

Contact us to obtain a copy of the book for review by clicking here.