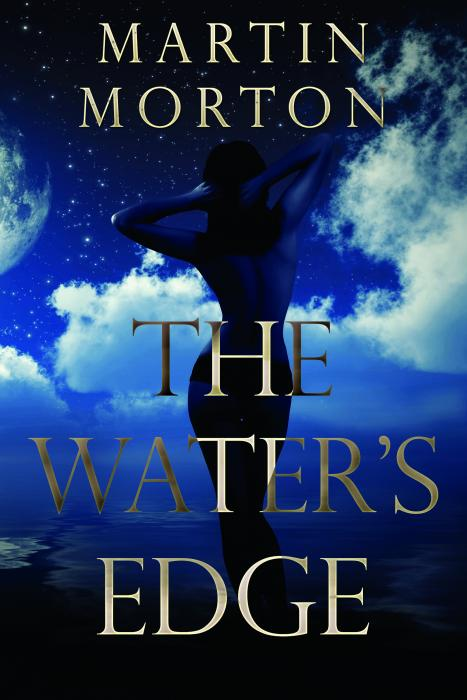 Martin Morton’s passionate page-turner, The Water’s Edge, has been making waves since its publication in May 2019. The author’s sensational must-read debut is the first of five books in a pulsating series that promises sex, submission and sensuality.

The Water’s Edge is an intense romance which charts the evolving and sexually-charged love affair between Claudia and Jack. Initially attracted at work, Claudia’s unfulfilled relationship with her husband and Jack’s failing marriage draws them together. However, their sudden and intense affair is soon tested to the limits when jet-setting Jack announces his plans to move overseas. Their intimacy and honesty is challenged by the unseen temptations that long-distance brings. Despite promising to stay in touch, how will they navigate their affair?

‘Come on, I believe in gossip and you know I’m nosey. And my only word of complaint about you, ever, is that you’re not indiscreet enough.’ He smiled.
And she talked. About the kids, about him at home, about the job.
‘And that’s been enough for you?’
‘There’s been no time for anything else – even if I had felt inclined.’
‘You’ve been asked?’
Her shoulders slumped. ‘Of course. Yours is not a noble gender. And it’s nothing like as tempting as it imagines itself to be. I’ve seen too many consequences and it so seldom turns out right.’
He looked glum and nodded.
‘Did you think it was going to turn out right? Your affair at work?’
‘It sort of has. We didn’t have big expectations. We needed something and I think we got it. But it would have been better to have been clear about that at the start.’
‘And what did you need? What did you expect?’ She realized she’d put this a little aggressively, even before she sensed his reaction.
‘I’d like to talk to you more about that, honestly I would. But I can’t help thinking before I respond that you’re asking the question at least as much about your life as you are about mine.’
There was silence. Coffee came.
‘Do you want to get the bill?’ He was right. Had she gone too far?
‘I do, but only if you’re going to sit and listen to my answer back at the flat’ He took her hand and squeezed it gently.
‘OK,’ she said without looking at him.
They sat on the sofa looking at the river and the lights of the city. He put his arm around her shoulder and pulled her gently to him. She snuggled in but stopped herself putting her arms around his waist.
‘You were going to talk to me about relationships at work and their dangers.’
‘I was. I am. It wasn’t my first.’ She stiffened slightly but, in truth, she was not surprised. ‘Are you going to tell me about yours?’
‘That’s easy. There aren’t any.’
‘Are you going to tell me about how and when you met your current man?’
She bristled and made to pull away, but he held her firmly. ‘That wasn’t the same thing.’ Although she had still been married when that started.
‘It never is, is it? You watch all these other people doing something that’s always unique for them in that moment, in that situation.’
‘And was it unique for you?’ She knew she’d put that rather pointedly.
‘I will answer, but I’ll preface it by saying that you’re asking the question partly for yourself and how you might be in that situation.’ This was true. She relaxed into him.
‘You have two people living difficult lives, unappreciated at home, together alone in a foreign place looking for…’
‘Sex,’ she said, partly meaning to tease but partly to pose the question to herself. She had been aware for a long time how attracted she was to this man, but she’d never tried flirting with him.
But he wasn’t yet ready to abandon the serious tone.
‘Well, I honestly think there’s more, but maybe that’s just it.’
She sat up. ‘I’m sorry. That was wrong of me. Please go on.’
‘You’re not wrong, obviously, but I don’t think that was the main thought. You just connect and think you can do things for each other. But, staying honest, it helps if sex is a possibility.’
He pulled her to him again. This time she put her arm around his waist.
‘Does that say anything about us?’
He rubbed her arm tenderly. ‘I think it might do.’ He kissed her forehead. ‘But we don’t have to rush anything.’
‘You’re leaving next week for the other side of the world and I’ll hardly see you again and we don’t have to rush?’
‘I’d like nothing more than to take you to the bedroom and make love to you right now but, fortunately, your car is about to arrive, and you can think about things for a couple of days.’
‘What happens then?’
‘You come here on Saturday to pick your car up – and spend the day in bed with me.’
She was somehow shocked but not at all surprised and she was very aware that her body was already impatient.
‘I’ll-I’ll have to check at home. I don’t know what everyone is doing.’
They were standing. He put his arms around her. He kissed her. She knew he wanted her.
‘I’ll be here. You have some thinking to do. Just know that I want you.’
That thought stayed with her all the way home.

About the Author
Inspired by his love of the ocean and travel, family-man Martin Morton spends the majority of his time writing on a boat moored on the Adriatic. In his early career, Morton was as an Astronomer carrying out research at the renowned Imperial College London. He later moved into business and travelled internationally before retiring early and buying a boat.

Published in paperback by Pegasus Publishers in May, 2019, The Water’s Edge is available to order at www.pegasuspublishers.com or from Amazon, Barnes & Noble, The Book Depository and Waterstones. Review copies are available on request by contacting us here.
Pages: 378
Price: £9.99