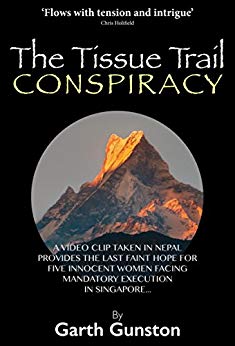 Garth Gunston’s intriguing political thriller, The Tissue Trail Conspiracy, is a compelling read from beginning to end and one that exposes the horrific consequences of Singapore’s mandatory death penalty in Class A drug cases.

The victims are five unconnected female back packers who all walk The Tissue Trail – a nick name given to Nepal’s most popular trek close to its border with Tibet.

They all innocently buy mementos of the trek but on arrival in Singapore the mementos are found to be concealing small amounts of heroin; small but just enough to activate the mandatory death penalty. That in itself rouses suspicion.

It is clear even to the Government prosecutors that something is wrong as the women clearly had no knowledge that they were carrying heroin and no arrangement to meet anyone to whom they would transfer it. But Singapore had never in its history relented in a Class A drug case.

The women’s defence team know that it will take an unprecedented and politically explosive explanation for Singapore to reconsider.

As the execution date approaches there is no sign of any new fact or development which might help the defence. Until the defence lawyer hears of the arrest of a medical researcher and amateur photographer (Edward Thurston) after he had taken video footage of a Tibetan salt caravan in the same Tissue Trail area. This seemingly innocent act had led his arrest and interrogation not only in Nepal but also when he reaches Singapore where he is conducting a clinical trial. The defence lawyer asks to meet Edward and asks him to collaborate to see if there is connection between the two cases.

The Defences suspicions prove to be correct. They slowly piece together evidence that the exponentially gathering furore of media and diplomatic protest is being expertly manipulated at the highest level of sophistication. As the executions approach all other news is increasingly excluded from the front pages.

As Edward gets closer to the truth people start to die. But curiously no attempt is made on his life In a spellbinding climax it becomes clear why.

Nepal and Singapore serve as the perfect backdrop to the book’s descriptive narrative that explores conspiracy in believable detail. The destination is vividly imagined, transporting readers down a trail of trepidation with multiple twists and turns.

Well-researched and entirely consuming, The Tissue Trail Conspiracy kicks off with a dramatic opening chapter as this extract proves: “In all normal circumstances, twenty-four-year-old Scot, Catherine Miller, would have been scheduled to hang on Friday, 6th July. Hanging day at Singapore’s Changi Women’s Prison was always Friday. But the level of protest in Catherine’s case, and that of four other young female western backpackers, had reached such extremes that at the last minute and with no public announcement, the Singapore Government had brought forward the executions to six p.m., Thursday the 5th, in an attempt to wrong-foot the mass protest planned for dawn on the Friday.

As the story intensifies and tensions unfold, the depth of the characters develop in tandem with the author’s increasing levels of suspense: “Catherine’s mental state steadily deteriorated and she remembered very little of what happened after the committal proceedings. She remembered something of the trial and the judge putting on the soft black hat to pronounce the death sentence.”

The escalating drama heightens the precarious predicament of the characters and is channelled to readers through great dialogues, descriptions and reported speech: “Two women backpackers were found dead in Pokhara to the west of Kathmandu on Wednesday. Their bodies were found by workers, hidden beneath sacks of raw wool in a Tibetan refugee camp.”

Despite its twisting, involved plot, the author himself has been pleasantly surprised that even people with reading difficulties are able to read and enjoy it. One dyslexic mother of three reported “This is the first book I’ve been able to read for ten years.” Another took two hours to write an email describing her childhood misery with dyslexia but that “surprisingly” she had been able to read and really enjoy this intriguing story.

The book has been enjoyed by readers of all ages (20-93), a wide range of occupations, different intellectual levels, and both sexes in equal numbers.

The author incorporates the flavour of the region within the formidable injustices of the pharmaceuticals trade. This background knowledge coupled with a familiarity with the setting adds authenticity to the story, and in turn, commands further attention from readers: “Thurston had graduated as a pharmacologist which he usually had to explain was the study of the effect of drugs and chemicals on human and animal tissue, and had spent the first ten years of his career in the research and development divisions of two major pharmaceutical companies working on clinical trial designs.”

Location descriptions of the Annapurna Himalaya, the Nepal / Tibet border and Changi Womens Prison Singapore have also drawn favourable comments; “I’m not much of a reader but this book made me feel transported.”

In response the author plans to add another dimension to the already apparent high level of enjoyment reported by readers by bringing these descriptions to life in a colour supplement.  Five examples of the supplement photographs are as below. 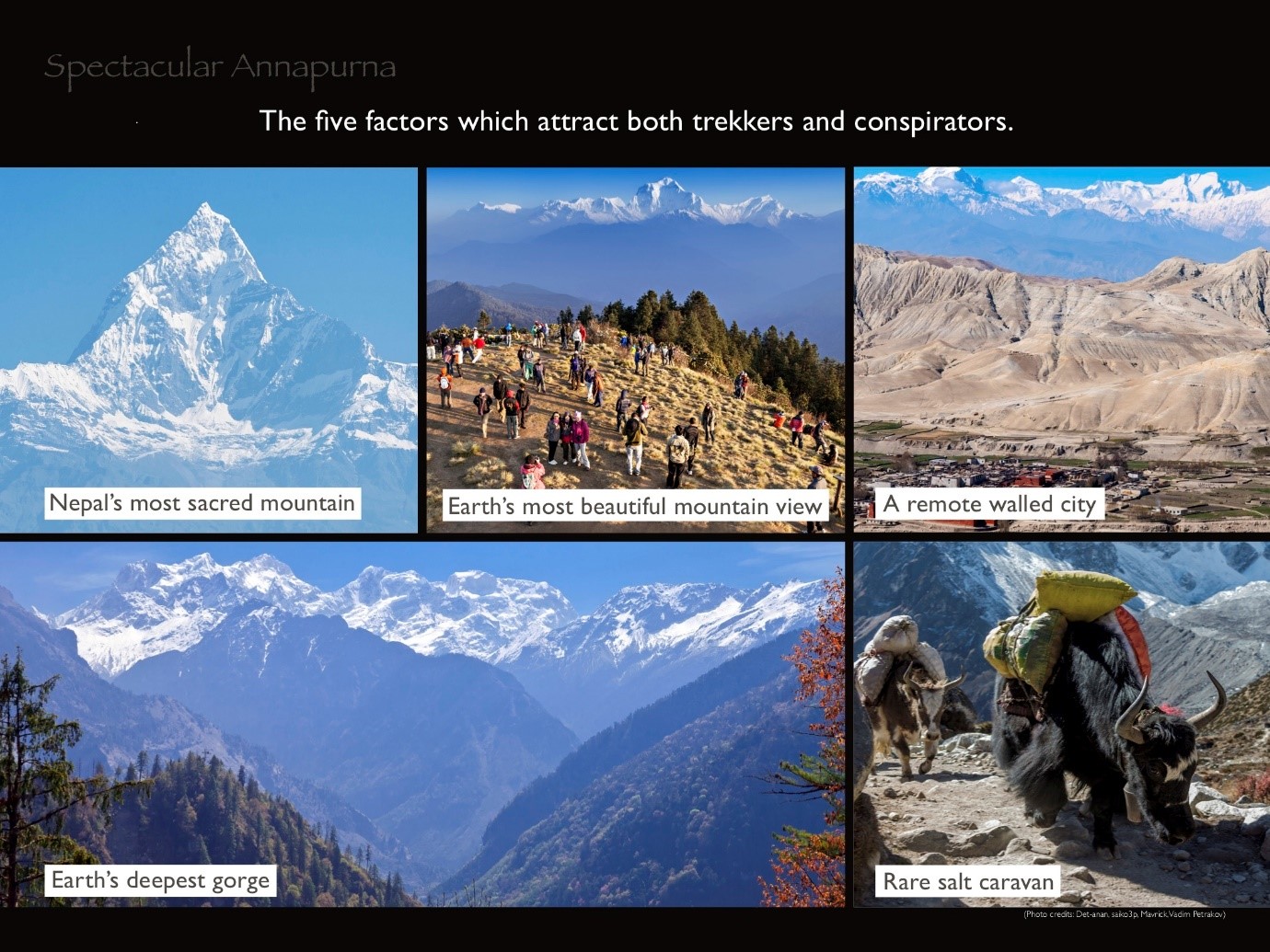 Review copies of The Tissue Trail Conspiracy along with EXCLUSIVE professional copies of the 32 page colour supplement and interviews with the author are now available on request.  Contact us here for details.

The Tissue Trail Conspiracy has a gripping and sophisticated plot which has been superbly constructed in a realistic and dramatic context. The author’s debut novel is an addictive read for people of all ages, genders and interests and is as intriguing and it is engaging – a true testament to fantastic writing and story-telling.

Praise for The Tissue Trail Conspiracy

AN ENTERTAINING READ – 4*
January 2019 – Amazon Kindle Edition Review
‘The book was well-plotted with good characterisation, building to an exciting conclusion. Would recommend it. It would also make a good film!’

BY THE END I WAS LITERALLY TREMBLING WITH TREPIDATION – 5*
June 2018 – Amazon Paperback Review
‘I loved this book and could not put it down. 5 stars from me.’

“THE FIRST BOOK TO BEAT MY DYSLEXIA SINCE HAVING MY THREE CHILDREN. IT RESTORED MY FAITH IN READING… THE BEST BOOK I’VE READ IN DECADES, PERHAPS THE BEST EVER”
Engineer. 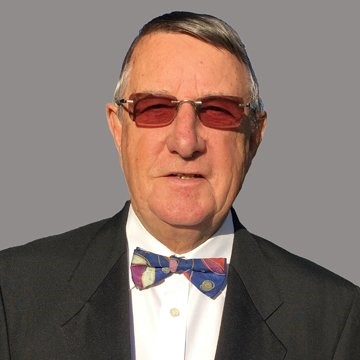 Garth was born in Derbyshire in the north of England where he first developed his taste for the wild open country. His career in medical pharmaceutical marketing and communications led to him exercising this passion across the globe from the Nepal Himalaya, Patagonian glaciers, sailing in the Arctic and the Caribbean, royal trains in India and Africa, white water in the Grand Canyon and the earth’s most spectacular waterfalls in Venezuela, Uganda and Brazil. And camels in the Sahara. His experience of and enthusiasm for aerobatic flying helped in researching flights through the world’s deepest gorge in Nepal for The Tissue Trail Conspiracy and he even managed to work his appreciation for fine wine into the plot!

Garth’s medical connections provided contact with the National Criminal Investigation Service Drugs Division in London and the Central Criminal Court Singapore. However, it was his involvement with international PR in the ‘drugs business’ which underpinned his first novel, The Tissue Trail Conspiracy.

Since leaving the pharmaceutical business he has owned residential and commercial property in the UK, Switzerland and the British Virgin Islands – and owned 50ft charter yachts in the BVI. Garth met Jacky, his wife, at pharmacy school and they have been together ever since. They have three daughters.