“For all those who thought their professors were often rather odd, The Optimist should confirm that view.”
From the Author, Roy E. Schreiber 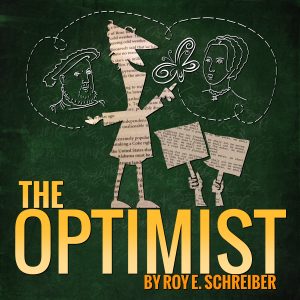 The Optimist is a gripping audiobook with a satirical twist based on college professors, featuring a philosophy professor, Ralph, who believes logic will solve all problems from bringing justice to all people, to personal relationships. He has visions of organising a faculty labour union to negotiate for better pay.

While fully recognizing the apathy and timidity of many colleagues, yet he carries on, declaring himself an “optimist.” To complicate matters even more, he must deal with the campus chancellor who wants him to organize a public lecture series in her name.

In his efforts to sabotage the series, Ralph inadvertently sparks an unlikely and turbulent romance between the two colleagues he finagles into speaking: an arrogant three-time divorced English History professor and a Women’s Studies professor.

Ralph’s optimism is severely tested when King Henry VIII, his queen, Ann Boleyn, the poet, Thomas Wyatt and Harry Houdini all somehow get thrown into the mix.

Contact us here to request the audiobook for review

After college (UCLA and University of London) Roy Schreiber spent a good deal of time teaching British History at a branch campus of Indiana University.

Like all the other professors, he wrote academic books, biographies of people only about fifty other academics in the world would recognize. It seemed like a lot of effort for a small audience, so he switched to more popular topics including Captain William Bligh and the U.S. during the Red Scare of the 1950s.

Besides books, he has also published short stories and had plays produced for the stage and for radio/podcast. With The Optimist, he uses his early academic career for his current interest.

Contact us here to request The Optimist audiobook for review
or buy it on Soundcloud, audiobooksnow.com, and audible.co.uk.