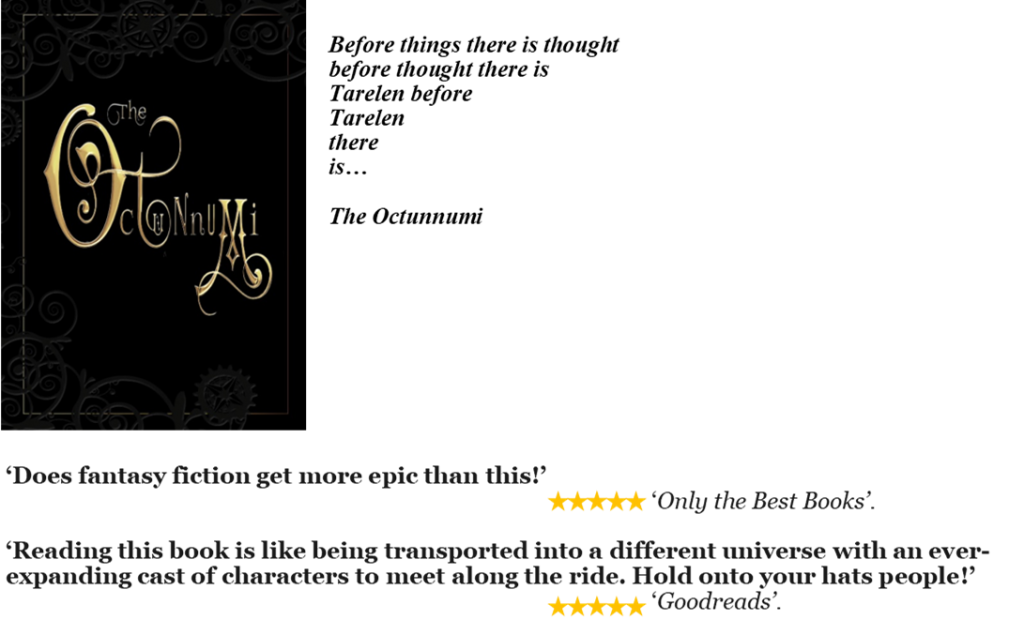 The Octunnumi does not exist.
Fosbit and any files relating to a Fosbit do not exist.
The Tarelen peoples that protect and provide sanctuary for the Avitens of Fethrist are not real.
The abilities of the Tarelen peoples with their heightened skills, living in their Utopian world are myth, their purpose here mere tales; rumours of their reincarnations enabling them to live many lives… ridiculous!

And there is definitely no magic.
None at all.
No, really, there isn’t.
Magic is not a thing.
There are also no hidden worlds or mythical beings coexisting just out of sight.

Equally, there are no secret access points to these hidden worlds that don’t exist, and there is no ‘unfinished business from the past’ that is set to destroy… well, anything.

There is no disaster looming.

Anyway, regardless of any potential threat that may or may not be present, The Octunnumi and any reference to any other beings is a work of fiction.

And for the record, Scariodintts, should they exist, are perfectly lovely beings whose purpose in life is grossly misunderstood.

This 520-page masterpiece is available to buy from The Octunnumi website  £25.00

For 2020, there is no better newbie on the market that grips the imagination quite like The Octunnumi Fosbit Files.

Not your run of the mill sci/fi fantasy fiction, this epic, compelling page-turner, packed with pithy wit and humour, action, and suspense, takes you on a fantastical mystery tour to the world of  the Tarelen people; a people who exist everywhere and yet nowhere, in a world of mythical creatures and magical happenings that are in no way mythical or magical… after all, when you exist, can you be deemed a myth? Equally, when being telepathic and telekinetic is second nature, is it considered magic? Of course, the ability to live many lives… well now, that is something quite different and carries its own responsibilities.

Rarely do you find such an engaging implementation of plot and theme as original and refreshing as The Octunnumi, but it does not stop there. As if all this were not enough, The Octunnumi embraces an innovative use of AR where, by simply downloading the free The Octunnumi app to your mobile, you can activate and bring to life hidden layers within the book cover and interior text.  With ongoing AR to be continually added way past the point of purchase, this is a book that just keeps on giving… quite literally… each copy sold generates a donation to The Octunnumi’s chosen charity – Goodheart Animal Sanctuaries

To assist with the unique and fascinating Tarelen language scattered throughout the book, The Octunnumi has its very own explanatory companion booklet, which also makes a very handy bookmark, thus enabling you to immerse yourself in The Octunnumi experience uninterrupted – make no mistake, you will not want to be interrupted.

Trevor Alan Foris’s debut novel, The Octunnumi, without doubt offers more than just an enthralling read. This is but the prologue – yes the whole book – to a promised twelve volume series.

One could be excused for wondering, with the ethical values woven throughout this first offering, is this merely a tale or a movement?

Either way, you will be left wanting more.

About the Author
Trevor Alan Foris… the elusive, evasive yet omnipresent enigma – the ultimate nomad, gives the word reclusive new meaning. Not known for his tact and diplomacy, and with a propensity for getting his own way, Trevor likes nothing more than voicing his own opinion and is happiest when doing so. Having been around longer than anyone is brave enough to mention, he has perhaps earned the right to do things on his terms.

Wise beyond words, Trevor is immensely proud of his role of confidant and adviser. An inimitable record keeper, with an extensive back catalogue, he is hopeless at Gintmops, finding his abilities hampered, but quite adept at Maliodd, albeit by cheating.

As a practising Onistccenian, his second love is animals; the first being himself. He is, however, rather fond of this planet and feels it such a waste should measures not be taken to preserve it. #BecauseThereIsNoPlanetB

This is Trevor’s first foray into the world of fiction – because that is of course what this is, fiction, and not real on any level – and he should currently be working on the second of the twelve volumes in the series that is The Octunnumi Fosbit Files… however, he has yet to convince Meg to work with him again (Lorin, of course ever the professional, is poised at the ready).

Trevor’s constant companion is his cat, Eltidds. Eltidds is, naturally, a black cat.