An unmissable mission to expose the horrors of humanity 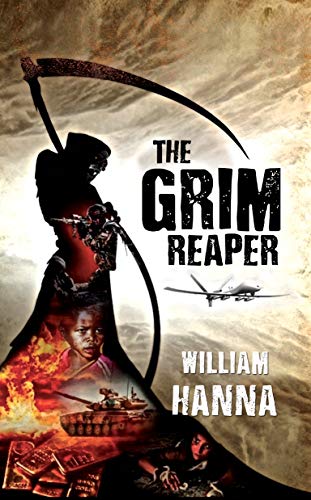 Request a review copy of the book by contacting us here

Published in February 2020, William Hanna’s high-concept contemporary thriller, The Grim Reaper, shocks and thrills from start to finish with its brilliantly fictitious but authentic plot set in a world crammed with crime, corruption and human atrocities.
Told through the eyes of the moralistic war correspondent, Mike Walker, readers share his mission to highlight and condemn the ethnic cleansing, censorship, Machiavellian politics and senseless wars he reports on from the bleak, battle-weary countries of Afghanistan, Libya, Syria, Yemen and beyond. The audience is soon drawn into Mike’s cause to expose the “Alliance between countries foreign policy including military meddling and mass murder that are supposedly keeping the world safe.”
Mike questions the West’s complicity to war with relatable characters and powerful quotes (ranging from John Steinbeck to Anne Frank) to cleverly convey the book’s themes and the power struggles between the dichotomies of good and evil, security and liberty and poverty and wealth. Committed to reporting the true scale of the world’s heinous crimes, Mike and his love interest, Kim, become threatened by and pitted against the dark underlying forces at work, such as the self-serving ‘security’ agents, corrupt corporations, untrustworthy governments and merciless mercenaries.
Throughout The Grim Reaper, Hanna constructs a compelling storyline, brought to life by his continuous thread of vivid descriptions in a day-by-day newsworthy format. From the deserts of Saudi to the monsoons of Myanmar, the unwelcoming terrains reflect the harsh, wild, unrelenting terrors of war, as Hanna writes: “As far as Walker was concerned, he could have been on some distant, desolate, and dying planet. But the calamitous carnage in the midst of which he was standing on charred cinders taking photographs was on Earth and man-made, rather than the consequence of some natural disaster or other cataclysmic occurrence.”
Uniquely imaginative and fictitious, Hanna’s book resonates with its readers, presenting the crimes against humanity with a relevance to real life echoed by believable characters. Alongside Mike, the additional characters help to tell the story from different cultural viewpoints and with emphatic voices that result in a gripping narrative from varying perspectives.
Hanna is a skilful, unique story-teller and The Grim Reaper follows a fluid, diary format that only adds to its realism, portraying Mike as an unrelenting reporter, critical of humanity’s guilt in contributing to barbaric acts. Hanna’s central character deliberately mirrors the shared conscience of human guilt and grief towards war and terror.
The Grim Reaper is a thrilling, intelligent and thought-provoking novel packed with horror, empathy and emotion. It has a well-executed plot and is “very professionally written and a highly competently constructed novel.”
“Shockingly good”, Hanna’s book will appeal to fans of both contemporary thriller and political fiction. This is a fast-paced page-turner that is difficult to put down, ignore or forget. As Yanina Goldenberg, E-book publisher, writes: “The Grim Reaper is an extremely salient piece of work, and one which is richly detailed but still works as an immediately compelling story. Overall, this is undoubtedly one of the best books of its type… It seems to possess everything required to be successful and one cannot praise it more highly than that.”
William Hanna’s novel, The Grim Reaper is available to review and author interviews are available on request.
Contact us here for details

William Hanna is an accomplished writer based in London. He has published a wide range of articles and books on democracy and human rights. His first book, Hiramic Brotherhood: Ezekiel’s Temple Philosophy was published in August 2017 and has since been translated into multiple languages. Further articles, reviews and videos from the author are available at www.williamhannaauthor.com.

The Grim Reaper by William Hanna was published in February 2020 and can be ordered in paperback and on Kindle at www.amazon.co.uk.
Price: £11.99 and on Kindle for £3.84

Excerpt from Chapter 3
Saturday 2, September
The Yacht Hotel
Yangon River, Yangon, Myanmar
Walker’s main reason for staying at the Yacht Hotel moored off the Botahtaung Jetty — with its magnificent view of the river and the nearby gold, ruby, and diamond-encrusted Great Dagon Pagoda — was mainly due to the reasonable room rates. Though legend claimed the Pagoda was built over 2600 years ago, archaeologists and historians have since suggested a time frame of between the sixth and tenth centuries AD. It was completely destroyed when the Royal Air Force (RAF) bombed the nearby wharves in November 1943, but was subsequently rebuilt after the country gained independence from the British and its 326-foot-tall (99 metres) now dominated the Yangon skyline.
Walker’s first task on finally getting back to the hotel yesterday was to peel off the clothes that still reeked of decomposing flesh and the toxic fumes that hovered over the ghost town of Chein Khar Li. He hoped that taking a long shower would physically cleanse his body and detox his mind. The ritual purification of body and soul was followed by enjoyment of a popular speciality of chicken, coconut, and noodles at a nearby restaurant. On returning to his room he retired for the night but remained awake pondering over the content and tone of his next dispatch.
Simply describing the atrocities would hardly suffice or even be of interest to most people in the West who were in a state of entranced indifference to the turbulence of a world where selfishness, greed, violence, and apathy prevail; where the freedoms of expression and of the press are subject to restriction and criminalisation; where gutless self-censorship by corporate journalists is overseen by newsroom editors inhibited by their own cowardice and the vested interests of media proprietors; where technology’s potential to liberate is instead used to condition, control, and condemn people to being subservient subjects rather than critical citizens; where the European Union is disunited and the American Dream has become a nightmare under the presidency of a deranged lunatic; and where the opponents of truth, freedom, and justice continue to be highly organised, well financed, efficiently deployed, and in complete control.
Before eventually drifting off into a fitful night’s sleep that featured an unsettling mixture of macabre nightmares and wispy dreams of the delectable Kim, Walker determined to make an early start on writing his article and emailing it along with photographic evidence of the atrocities committed to his UK press agency by this afternoon.