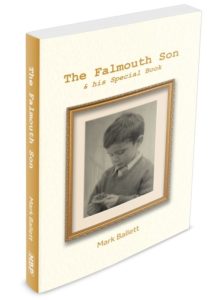 “If you know anything about the town, you may be surprised to find things in this story that you have never heard about, or come across, or places you cannot find on a map. Perhaps that is because when you are looking back, it is hard to separate the fact from the fiction, the soft dreams from the hard reality, or even what came first, or last; buildings and events are out of place in time and ‘my’ Falmouth is also an amalgam, a hybrid place, with some elements of the town of my birth, Dartmouth, mixed in because, for me at least, the belong there.”
– Author comment, Author’s Preface.

Peter Rowe, known as Fyche because of his exceptional swimming abilities, returns home to Falmouth off the back of receiving the devastating news of the sudden and unexpected death of his mother who exiled him. It is soon after that Fyche discovers worse news as he is longing for better: his mother had lied to him, about his absent father. A lie of such gravity that Fyche decides to stick around his hometown to uncover the truth of his paternity, a truth that the local community seem to be working to great efforts together to prevent him from discovering.

What does the town of his fellow Falmouthians have to hide and why?

Feeling rejected by the place that has always felt like a natural extension of himself, Fyche searches unabridged, starting with Nessa, a one-time lover and teacher, the person who encouraged the creation of his Special Book, an imaginary existence of adventures with his father who he named, The Captain.

Navigating childhood memories, a town that is changing at the seams and attempting to fill the paternal void of the unknown and lies that his mother has left him with, Fyche meets people who test the boundaries of what he knows about himself, slowly opening up to a woman called Chrissy, after his initially crude advances, and the local eccentric, Penny, who first attacks him, later converses with him and may or may not answer the questions he is looking for, but provides information on his mother that he needs to hear.

Fyche is later confronted with the return of a man with a criminal past, and a dark connection with his late mother, and is later attacked again, this time more seriously. His search sends him through acts of betrayal, heroism, love, and despair, he is reunited with family and attempts to find peace with the slow accumulation of information he eventually ties together to fit a story. Unsettling reminders of the facts of his life he knew so little about seem endless, but they do make him turn to his emotional home, Falmouth, which ultimately is what, in the end, will reveal the truth about his father.

What he discovers changes his life completely and helps him to understand the meaning of love in this gripping mystery and contemporary romance of rediscovered connections and family bonds, people and place.

How can you love, or allow yourself to be loved, until you know who you are? 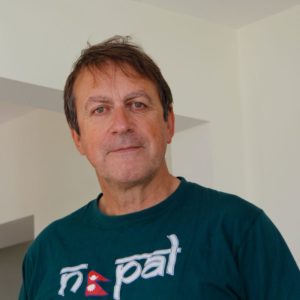 Mark Ballett published his first novel – The Falmouth Son – in 2018. It is the first of the Lingering Past Trilogy. His next book, Last Summer Night, due to be published in 2019, is set in Kirkwall on the last night of summer. Identity, and how it is shaped by family, communities and particularly places, is a common theme in his writing. He has previously written a couple of business books, having for many years been a business manager and adviser.

Falmouth has been a great inspiration to Mark and his visits to the Captain’s House were the catalyst for his latest book. For an insight into Mark’s world, you can visit the wonderful Captain’s House, in the centre of Falmouth

“A young man finding his identity, his father and true love. Lyrical.” – 5*

“Imaginative, evocative and a pleasure to read.” – 5*

“Fabulous, a MUST read especially for Falmouth!” – 5*

HAVE YOU REQUESTED YOUR REVIEW COPY OF THE FALMOUTH SON YET?
CLICK HERE TO CONTACT US NOW!