‘Amira turns back one final time to gaze upon her childhood park. As she muses into deep daydream over past memories, she feels a part of her soul seal itself with an everlasting imprint on the walls and streets of her town, the swings of Shamsa Park, and the weeping willow tree that stood like a protective guardian, for this was the only departing gift she could present to her broken home of Aleppo.’ 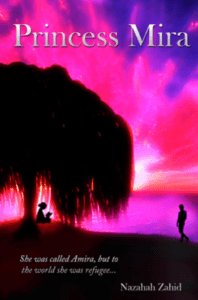 Princess Mira, by author Nazahah Zahid, is the extraordinary and heart-breaking pilgrimage of childhood friends, Amira and Khalid, who are left to navigate the escape of their home in Aleppo drowning in the deluge of the Syrian Civil War.

Testing her limits of an unforeseen journey, Amira’s feelings of safety endure the same mass exodus as the Syrian refugees, as she grows to each new era of the war commencing under her feet. Together Khalid and Amira are anchored by the same willow tree they were forced to abandon, under which they always sat beneath. Now in turmoil, they dream to return to it one day.

In times conditioning them by growing up within the crucible of war, it is still this truth that enables Amira and Khalid to discover a deeper meaning to what love, friendship and separation really means.

Amira reached Khalid’s house. He lived only 15 minutes away from Amira in a small boxed flat with his father and younger brother, Shakil. Khalid’s mother had passed away 5 years ago whilst giving birth to Shakil. She had bled to death. Mama had always been like a mother to both Khalid and Shakil since then.

Amira entered the main gates of the flat, which were rusting and barely standing, and scurried up the stairs. Khalid’s door was a molten red colour which Khalid and Amira painted last year from a pot of paint they happened to find outside an old art gallery that displayed paintings and sculptures made by foreign artists.

The door was left slightly open. Amira went in.

“Miiirrrrraaaaa!” shrieked Shakil, with a juice carton in his hand. He skipped towards her and hugged her legs tightly.

Shakil loved Amira. She was like an older sister to him. He was roughly the same age as Adam, so they spent a lot of time together.

“Khalid! I’ve asked you once and I will not be repeating myself again, do you understand?” screamed a deep, hoarse voice coming from inside the kitchen.

Amira saw Khalid’s father, Uncle Hussain, wearing his crummy sleeping rope, that had looked as if it had not been washed for weeks. A giant of a man, he was advancing rapidly through the kitchen doorway, his tanned face almost completely hidden by his shaggy, greasy hair and his chaotic, tangled beard. He walked right passed Amira as if she were invisible. He leapt at Khalid, who was dressed in his camo trousers, white Syrian football shirt and an Arab Keffiyeh scarf wrapped around his neck. Amira had already guessed what the dispute was about.

“Baba, I am 16 years old; I have my own views and beliefs. I don’t care what anyone says, I am going to the march and the protest later in Idlib. I’ll be back in 3 days. What’s all the fuss?” snapped Khalid, angrily, now realising Amira had entered the house and was holding onto Shakil, who was frightened by all the shouting.

“Assad has already killed hundreds of demonstrators and imprisoned many more! You want to be another percentage? Another victim? Another body I’d have to bury?” Hussain was now stuttering his words, forcing to spit them out without crying.

Amira caught a glimpse of Hussain’s face. He turned to her in desperation. She could make out from his eyes, glinting like black beetles under his thick strands of auburn hair, that he wanted Amira to intervene somehow and stop Khalid from going to Idlib.

Khalid bulldozed past his father towards the main door and left, slamming it on his way out, causing the planted pots to rattle. Amira looked at Uncle Hussain, with reassuring eyes.

“It’s okay, I know where he’s gone. I’ll speak to him,” she consoled Hussain, handing him Shakil and the plate of Kunefe.

“He thinks this revolution and uprising against Assad is a good thing,” whispered Hussain, helplessly. “I did too at first, I even went on marches with Khalid, but look, Amira child, just look. The dangers are too frequent now. Every other day there are bombardments, shelling and mortars. Just last week, Muhammed next door lost his brother in these protests.”

Amira walked to Hussain and rubbed his shoulder in comfort.

“I’ll bring him back, Uncle, I promise,” and with that, Amira kissed Uncle Hussain’s forehead and Shakil’s cheek and left.

CONTACT US HERE TO REQUEST A REVIEW COPY OF THE BOOK

Nazahah Zahid is a 24-year old aspiring author and grew up in the heart of East London in the borough of Waltham Forest. Post completing her A Levels in College, her career began working within the education sector and has worked alongside Primary, Secondary and College-level pupils. At present, she works full time within an all through school in East London.

She began writing her debut novel ‘Princess Mira’ purely on the basis of ‘telling a story’. The Syrian Civil War is now entering its 9th year. A big portion of Nazahah’s inspiration for this novel was the goal of spreading awareness of the tragedy and despair experienced by the thousands of Syrian children who lose their families on a daily basis and are forced to live in a war-zone or flee. Too often their cries go unheard and Nazahah advocates for the help and support of all those affected by the ongoing war.

Amira and Khalid, though fictional characters, represent the fear and danger of all the Syrian’s having to find a way to survive in circumstances so out of their control. Nazahah stepped away from fictional writing and in publishing Princess Mira, has chosen to address the raw realism of war. Looking forward, she intends to focus her next works on more true stories, in an effort to catalyse the same thought-provoking response from readers and she hopes this one will.

Nazahah is a fond reader and especially enjoys the works of her favourite authors; Khaled Hosseini and Elif Shafak. 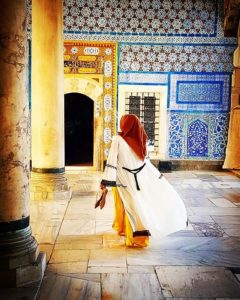