“A gem of a read”
MICHAEL JENKINS 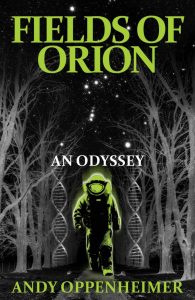 “Oppenheimer blends an expert’s knowledge of bomb disposal with cosmic imagination and a refreshing wit to serve up an engrossing SF thriller that is two parts James Bond to one-part David Bowie, and great entertainment from start to finish.”
DAVID HAMBLING

The most secret Government project in history.
A distant message.
A devastating legacy.
The countdown has begun

Fields of Orion is the explosive debut in a trilogy of science-fiction thriller novels by Andy Oppenheimer, based in a world of espionage, terrorism and first-contact set in the near-future.

Major Adam Armstrong is a charismatic man, a bomb-disposal operator, who whilst on service in Iraq develops telekinetic powers. Now reluctantly recruited into a futuristic military project, headed by ice-cold Sheena, a spurned lover hell-bent on revenge, the aim is to create what will be known as supersoldiers.

Dan Boland is a maverick counter-terror expert and foresees the fourth London attack in July 2005. He is recruited by MI5 to sabotage a group of high-ranking scientists who are plotting acts of cataclysmic terrorism.

Why is Dan envisioning flashbacks of Armstrong’s desert battle carnage?

What is it that magnetises him to the furious waves of energy above a North London park?

One vibrant geneticist makes a shocking discovery about Adam Armstrong. Where will this discovery propel the most covert Government programme in history?

Armstrong is walking into unprecedented danger, but can he shoulder the world’s biggest secret?

Inspired by the bomb disposal operators and army veterans that author Andy Oppenheimer has had the pleasure to know and work alongside, Fields of Orion is a combination of that incredible experience and a vastly different life early on in the 1980s, working for futuristic sci-fi magazines, along with the extensive knowledge of terrorism and passion for space, Greek legend and the musical/visual inspiration of David Bowie.

Breath-taking mystery, gripping dialogue and heart-pounding action catapults you towards its Earth-shattering conclusion.

“A fast-paced, expectation-defying novel set in the tense world of bomb disposal. It contains all the excitement and intrigue that a reader would want from a military thriller, but with a surprising, genre-changing plot twist… It also explores the boundaries and expectations of masculinity, from ancient myth to modern hero.”
ANNA MAGUIRE ELLIOT

Anyone with an appetite for military action heroes, apocalyptic villains, quirky spies, mind-blowing first contact and cosmic imagination, is certainly going to be captivated by Fields of Orion: An Odyssey.

Published on Amazon Kindle and Paperback in August 2019.

Then it had come. On that last tour, walking out into the Iraqi desert after dealing with a daisy-chain deployment of IEDs. The black clouds of explosions littered the scorched skyline.

The force of the signal knocked him to the ground.

He blacked out. For several moments, as the signal blasted his eardrums and split open his very soul. He opened his eyes, gasping for breath. Had he hit an IED? No. His limbs were still there.

It had come. The message. Why he had the skills.
And how and where he would have to use them.

He was chilled to the bone while the sun beat down on him. He devoured the air, doubled up on the rocky ground. He felt the desert earth beneath him shudder. He thought his head was exploding. Not like him; it took the intensity of battle to get near that. It wasn’t PTSD. Not this time. He didn’t believe it. But he had to believe it.

After long centuries, the signals had arrived.
And he wished, he really wished, they hadn’t.

The ground below him shook. He felt it sucking him in like quicksand. He staggered to his feet, the sun searing his eyes. Fighting the monstrous pull of the Earth, he ran for cover.

Contact us here to arrange your review copy of the book

“With all these disparate influences, I wrote Fields of Orion. And above all, it was written with love.”
ANDY OPPENHEIMER.

Additionally, author Andy is an Associate Member of the Institute of Explosives Engineers and Member of the International Association of Bomb Technicians and Investigators. A former Editor of Jane’s Nuclear, Biological and Chemical Defence, he has written hundreds of articles for specialist defence and security journals, provides consultancy and interviews to media, and is a speaker at conferences worldwide.

His first major book on explosives and terrorism, IRA: the Bombs and the bullets: A History of Deadly Ingenuity, was published by Irish Academic Press in 2008.

Aside from his field of expertise, Andy has also been a singer/songwriter of electro pop music since 1982, and an avid painter of surrealist pictures, a passion that has continued on from his childhood.

For more information on Andy Oppenheimer, visit his website. 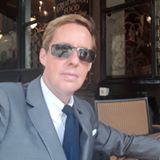 Request your review copy of FIELDS OF ORION here