A COLLECTION OF WRITINGS ON PHILOSOPHY, THE NATURAL WORLD AND THE HUMAN CONDITION. 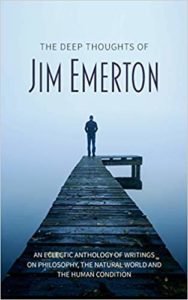 CONTACT US HERE TO REQUEST A REVIEW COPY OF THE BOOK

The Deep Thoughts of Jim Emerton are a collection of articles, observations, letters, stories, comments and verse previously published in the various Mensa publications for members, including Mensa Magazine and members’ periodical Cognito.

“The whole purpose of my writing is to project what I see as the truth of my own experiences, combined with knowledge gleaned from cultural studies of the arts and sciences. Writing is a way of life, and my personal way of giving something back to the birds and other subjects I have devoted my life to. It is rewarding when people find it interesting or enlightening, although some of the ideas are poetic or philosophical.

I like to reflect my special feelings and insights into the mind of man and what we really know and don’t know about the world around us. Educated on the great writers like Blake, Kafka, Dostoevsky and Sartre, I aspire to having perhaps a fraction of their collective wisdom and penetrating insight.

Membership of Mensa has opened up a sea of writing possibilities for me in specialist newsletters and magazines, and I now indulge myself regularly in this activity. My thanks to all who take an interest in my publications and my highly-personalised writings.”
Jim Emerton, Introduction, The Deep Thought of Jim Emerton.

Here lies a collection of Jim’s more philosophical writings, an eclectic anthology, and his general attempts as he puts it to ‘verbalise the unknowable’.

What are people saying?

“It would be easy to dismiss Jim as an eccentric with niche interests in pigeon racing and Mensa, but in his book he clearly has a fascinating understanding of the human condition, psychology, philosophy and nature. The book is also filled throughout with some beautiful poetry.”

“There is something luminary in this book. In the writing, as in the reading, there is something to nurture the head, the heart and the soul. The form rolls forward. Each part in itself is a part within a greater cosmic whole which is Jim’s metaphysical spirit finding itself shaping and forming in carefully crafted words; the philosophical, the personal – infused with feeling and seminal life-moments, musings from his life-experience, his educational and professional history, his close affinity to nature, and illustrated and embodied through beautiful life-affirming poetry. His life abundance and humility shines through and invites the reader to think, feel and go with him to the depths of the shadows and the ecstasy of being alive in this moment.” 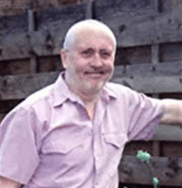 Jim Emerton is a lifelong lover and advocate of the countryside, and the wild creatures whose life has revolved around racing pigeons since he was introduced to them by his father at the age of three.

He lived an idyllic childhood spent mainly in the Lincolnshire Wolds where he first began racing; his mother Dorothy and later his partner Jean worked alongside him in the lofts. The peak of Jim’s career came in 1995 when his bird Barcelona Dream set a new British International Championship Club distance record in the renowned Barcelona International race with a record flight home of 879 miles, leaving his mark in the realm of marathon racing in Europe.

When Jim retired from racing in 2006, he contributed to the sport by donating his 140 birds to the National Flying Club. Since then he has continued to be a huge supporter, though not actively, but has become internationally known as a writer and commentator on the sport, writing a series of books on various aspects of pigeons, the countryside and the wild outdoors.

It is an undying love that, who knows, may once again open the door to a future participation. Jim is a highly intellectual man, a thought-provoking person who continuously pushes the fancier and reader to think about things on a deeper level.

He became a member of Mensa in his thirties, subsequently joining no fewer than 15 of its special-interest groups. He now spends much of his time writing for Mensa publications and the pigeon racing press.

A dear friend, Chris Williams, put it like this:

“I set my mind to what I considered to be one of the greatest privileges in my time as a writer because during that process I learned so much from him, not only how to improve as fancier but also a pigeon racing journalist […]

The man is highly intellectual, but for all this he keeps his feet firmly on the ground and is always willing to help and encourage fellow fanciers and writers, this I know from personal experience and because of this, there is no doubt in my mind that the work of Mr. Emerton has brought the sport forward in a way that has not been seen since the great JW Logan.” – April 2019