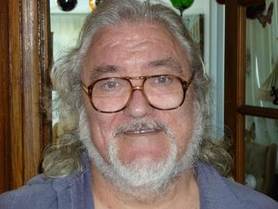 Barry Woodham has spent his professional life working as a design engineer/draughtsman and has worked on the nuclear fusion project for 13 years. Born in 1943, he has lived in Swindon, Wiltshire all his life. Barry is husband to wife of 50 years, Janet, and together they have three sons all in their late forties.

Originating from one eventless lunchtime, Barry found himself with nothing to read, and so he began writing. As a result, Genesis 2 was born, the saga of the Gnathe. Barry lives happily in retirement with his wife and was able to take this early at a time when his colleagues associated with the nuclear fusion project began reading his efforts as soon as he could finish the next chapter. Their powers of persuasion worked wonders as he made it halfway through the final section when the project ended, and so ensued early retirement, where he enjoyed fishing, walking the dogs, but did experience difficult in finishing the story.

A century and a half later, following the struggles from the separation of his colleagues as inspiration, and lost text through a change of computers, it took effort to retrieve the full story. He always knew how it would end, but completion seemed a rut he couldn’t get out of. But he did.

In one fell swoop, Barry put 15 years-worth of writing in the hands of a new publisher to self-publish all 5 books in the Genesis series. You will meet more strange alien beings in these books than most authors or reader could imagine.

Barry has continued to write many more stories both Sci-Fi and Fantasy and has filled his blog with many more for you to read. Link here: http://sci-fiauthor.blogspot.co.uk where you will find the likes of The Enchanted Land, consisting of five linked stories;

During the writing of Genesis 3, he began to think about Elf War, and finished that before finishing the whole genesis project. In the Elf war project, Barry used no magic, just elf science!

“I hope you will enjoy reading all of my work,” Barry says, “as much as I have enjoyed writing them!”

TO REQUEST ONE OF BARRY’S TERRIFIC BOOKS FOR REVIEW, CLICK HERE

This is one of Barry’s most recent series, and it is popular for good reason.

Imagine Elves armed with AK 47’s and mind pressing T-Rex’s to hunt down the Dark Elves?

“I did enjoy writing this series, but as I said before, I did not use magic, only Elfin physics in this series of stories. Developing the persona of Peterkin, the reluctant High King was fun. Someday I would like to return to that strange set of parallel worlds and find out what happened next????”

Barry’s Elf War series is a contemporary fantasy of epic proportions as it takes on existence thousands of years in our past where Light Elves fled to our world, pursued by the Dark Elves. There is an unwritten law: Elves do not harm Elves. But something else may get in the way of law: war.

STAR SEED AWAKENING: The collective has spread its seed across the interstellar void and found intelligence. Can the high king and his aliens stop it from conquering all life in the multiverse?
The most recent, and final instalment in the Elf War Trilogy sees action on every page and a vast array of dimensions blending together in a neatly gripping plotline.
One Amazon review states: ‘A perfect blend of Science Fiction and Fantasy’.

The Collective had evolved at the very dawn of time, and now it had found a way to propagate by building a gigantic tree-entity which could spread its seeds to new worlds far across the universe. The Velociraptors of Haven have acquired a Spellbinder, enabling them to explore parallel universes.

Having found a dinosaur-dominated Earth copy, they encounter one of the tree-entity’s seed-capsules at the end of its billion-year journey. Through its seeds, the Collective has mindlessly begun to enslave all life on the planet and to direct evolution. Now, for the first time, it has found intelligent life – the Raptors – which promises to bring it the power of awareness.

Now Peterkin, the High King, is faced with a terrifying problem. If the Collective can learn how to manipulate the space-time Rifts that separate the worlds from each other, it will spread its seeds to all the parallel Earths in the multiverse, dominating all life. Can he prevent this – and what price will he have to pay?

Star Seed Awakening’s two predecessors set are a must-read for anybody looking to fully immerse themselves in Barry’s hard-hitting final instalment.

The Elf War, book one, introduces the Ljo’sa’lfar, pacifists who have evaded the Dark Elves’ cannibalistic tendencies, and the Dokka’lfar, who opened a rift into our world. After thousands of years, they have found the Ljo’sa’lfar again on another parallel Earth. Attempting to pierce the poisoned brier, entrance to the land of the dinosaurs, it is the Ljo’sa’lfar who block their path.
Meanwhile, Peterkin is an elf propelled into the annuls of history after getting the High King’s daughter pregnant. A motion of events catalysts him into foretold legend.

After the first instalment of Elf War, what followed was success that Barry couldn’t ignore.
“So many were asking if I could go back to the Elf World, I did, and Molock’s Wand was the result.”

A daughter’s revenge wields a deadly weapon.
The defeated are not always destroyed.

In the immense science-fiction-fantasy universe of trolls, elves, humans, dinosaurs, gnomes and goblins, Molock’s Wand is the epic sequel to The Elf War.
A sudden rebellion by slaves under her command, destroys her Dark Elf stronghold and forces Molock’s daughter, Eloen, to flee into the wasteland of Aifheimir. She vows vengeance. Bloody trails of death and destruction follow on Eloen’s quest for a formidable weapon buried at her brother’s side. If claimed, Eloen can perfect the crude race Dokka’lfar and continue her father’s reign of terror.

Will the High King Peterkin be able to renew and forge alliances to rebuff the onslaught of Eloen’s tyranny?

GENESIS 2: Mankind has another chance, on another world but at what cost?

Set millions of years after the sun has entered its red giant stage on a vastly altered Jupiter. The alien Gnathe are instinctive genetic engineers. They alter living creatures to be their tools using their brooding pouches, controlled by the third sex. Four guardians made of nano-technology recreate intelligent Pan-chimpanzees and humanity in an effort to bring back mankind, sent towards the stars from the dying earth.

GENESIS DEBT: Can the time-distorting crystal hidden on Jupiter be uncovered in time?

The sequel is set in an existence of a recreated human race by nannite Guardians on a Jupiter that has had its great gas mantle stripped away. The crew find a seeded world teaming with life on a super continent that stretches from pole to pole.

The tyrant was defeated several years prior, and now Ender-whann-soo’s Brood-mother’s daughters devise a way to reach out to humans on Earth six million years into the past. Will the riddle of the Gnathe’s existence on Jupiter finally be explained?

Can saving the human and ape civilisation really become a reality?
The Genesis Debt will be paid by the Gnathe.

GENESIS WEAPON: A destructive alien force takes over the three civilised planets and threatens all life on them.

A wormhole system has been established between Jupiter and The Three Worlds that orbit Icarus, and from a thriving civilisation growing on The Three Worlds centuries later, without warning the connection is severed. An alien weapon of mass destruction arrives to the newly settles worlds with one message:

”I am Toarvak 6, destroyer of worlds, servant of the Kresh. You are not Kresh. Toarvak 7 has been informed. I am the Will and the Way. You must all die. Purity will be maintained.”

GENESIS SEARCH: One day the Andromeda Galaxy will collide with ours. What if it was deliberate?

Set hundreds of thousands of years after the events that occurred in Weapon. This part of the saga concerns the deliberate collision of the Andromeda Galaxy with ours in the far distant future. What kind of entity could cause this to happen and why?

This book attempts to settle those questions and concerns building a hunter/killer group from the ones who defeated the ‘Goss’ in Book Three by going back in time to remove their DNA and clone them, restoring their stored minds into young healthy bodies.

GENESIS 3: A NEW BEGINNING. Millions of Years in the future there is a machine intelligence left-over by the harvester’s actions that is settling solar systems.

During the manufacture of the fourth book in the series, the idea for this final instalment came to author Barry. That the group of mixed humans and aliens would discover themselves left to deal with the abandoned machine intelligence left behind by the events produced by ‘The Harvester’.

Solar systems are settling, life is being obliterated in its expansion of territory. The sentient survivors of the war against the Harvester form a strange alliance with one of the collectors to try and defeat the self-replicating Janis probes sent to planets orbiting nearby stars, that never got the chance to settle.

The various species of the alliance are plunged into a brutal battle for survival against an enemy that will never surrender. As the odds mount against them it seems that the humans that left earth many years ago have finally met an adversary, they cannot overcome…

REVIEW COPIES OF THE GENESIS BOOKS ARE AVAILABLE.
CONTACT US HERE FOR DETAILS