Archie and the Enchanter – Alexander Weir

The discovery of powerful Scottish magic through an ancient set of bagpipes.

‘No one knows where it came from. It was found in a heathery glen by a shepherd tending his sheep. The shepherd was keeping a wary eye on the horizon for Viking raiders and for a moment looked down. And there it was shining silvery at his feet.

What it could and would do was a constant source of amazement. It didn’t seem to age, and despite the passage of the centuries it always looked as shiny and new as it had been when it was found. It became a treasured possession of one of the Highland clans. Its ownership was kept a closely guarded secret although the Royal Stuarts knew about it and called upon it to be used in their quest for power.

Then it was lost. Everyone in the clan searched, but no one found it. The chanter entirely disappeared during Scotland’s troubled times at the close of the seventeenth century.

Who knows how the conflict at Culloden would have turned out if it had been there.’
Archie and the Enchanter – Introduction

The West Coast of Scotland is the home for many strange tales, and this is one of them.

Scotland. The West Coast. Archie, a scruffy scallywag, discovers a set of bagpipes that do impossible things. The unearthing of these ancient bagpipes reintroduces the supernatural and mysterious powers it yields. It is unknown who made it, or where it came from.

It is known to have appeared to a terrified shepherd hiding from Viking raiders. The chanter, 1,500 years old though seemingly brand-new, had its powers used to change the direction of the clans and when it was needed most, disappeared, leaving Scotland an open wound of impending disaster at Culloden’s Jacobite risings of 1715 and 1745.

Enchanter is what Archie named the ever-shining chanter, the part of the bagpipes that the piper will use to make music. Enchanter, because that is what it did. Through its music, history enacts its own changes. Animals can be made to dance, people are transformed, buildings re-design themselves.

Shrouded in mystery, Archie is the Enchanter’s next caretaker, a boy who unbeknownst to him, now carries something worth more than he could ever imagine.

But the Enchanter has its own agenda.

First of a four-book series, this fantasy saga beautifully vivid in imagination and history, depicts the rugged and beautiful West Coast of Scotland through a plot filled with amazingly strange magic and the allure of an ageless, divine instrument of power.

A film transcript of Archie and the Enchanter has been written and accepted for production by a Dallas based film producer. Contract negotiations are underway.

The much anticipated second book in the series, ‘Archie and the Dark Door Mystery’ was released in May 2019, the story of a treasure hunt with an unusual twist. Both are available to buy on Amazon. Two further books featuring Archie and the Enchanter are planned – watch this space!

It was creepy, and I was scared stiff. It was hard to stand still when all I wanted to do was scarper out of there. However, it was even harder for me to resist the magnetic pull drawing me deeper into a dark mystery. At last, I gave in and, again like a zombie, moved unwillingly forward into the unknown. The gas mask was a bit of a problem; the eyepieces were steaming up making it very hard to see and, what is more, breathing with it wasn’t easy. None-the-less, I stuck with it; it was fun.

Eventually, I found myself in a corner on the far side of the cavern with nowhere else to go. I stood still then, listening as hard as I could, slowly began to turn around. As I did so, something clutched at my ankles.

I screamed in terror and dropped the flashlight which promptly went out as it hit the floor. In total darkness, I kicked whatever it was that had grabbed my ankles and got down on hands and knees to find the torch. For some time I groped around, becoming more and more scared. Finally, my fingers touched it and, seconds later it was in my grasp. To my relief, I found the fall had merely switched the torch off and that it was still workable.

I got to my feet and shone the torch on the floor to see what had grabbed hold of me. All I could see was a small black bundle. Was it this that had been drawing me through the darkness and watching me as I made my way? In the torchlight, I saw what looked like a pair of black, beady eyes staring up at me. For a minute or two we stared at each other. Pushing my fear behind me, I bent over to see what it was. It was an old set of bagpipes!

With a great sigh of relief, I picked up the old instrument to look at it more closely. Its beady eyes seemed to be nothing more than a reflection of the torchlight from its unusually bright silver chanter, but I knew that wasn’t true. As I examined it, I felt my search was over. The answer to why I was at Grandpa’s house was the ancient instrument now nestling in my arms.

I knew all about bagpipes and what to expect but what I saw was way out of the ordinary. Although it was old, its shape was vaguely familiar. I recently read about ancient Scottish music and here was one of the relics illustrated in the book.

A tingle went through my hands like an electric shock as I stroked the chanter. I yelped in pain, and let it go. Instead of it dropping to the floor, it stuck to me as if glued. I don’t know where it came from, but I was overwhelmed by the urge to play the old thing. Again, like a robot, I mechanically yanked off the gas mask. It is impossible to play bagpipes and wear a gas mask at the same time. I carefully put the torch on the floor in such a way that I could see what I was doing. I put the mouthpiece to my lips and blew with the old instrument still resting in my arms.

It was not easy. I blew and blew. In fact, I became quite dizzy from the effort but didn’t give in. The dust from the mouthpiece got into my throat and made me cough. Suddenly, there was another cough, one that didn’t come from me but the old instrument instead. We were both coughing together at the same time.

As it coughed, a cloud of dust shot out of its drone pipes. Although this is perhaps what ancient bagpipes do when they’re suddenly brought back into use, I’d never expected it to cough. ‘Well,’ I thought, ‘at least, the cough showed that it was still alive and kicking and probably playable as well.’

I got to my feet, picked up the torch and with the bagpipes hugged to my chest began the return journey. I scrambled over the junk mountain and rushed to the way out of the cavern. I forgot about the boiler and coal and ran straight into the black mountain range. Probably because of being ignored for so long, it seemed delighted in having a new playmate and wanted fun. The coal heap had a mind of its own and fell over me in a joyful cascade of dirty blackness. I too fell all over it, and together we rolled about on the cellar floor, one in joy the other in misery.

Eventually, I got to my feet, ran to the steps and rushed upwards. Out of the cavern and into the daylight I sailed with the ancient bagpipes clutched to my chest.

DID YOU CONTACT US FOR A REVIEW COPY OF THE BOOK YET?
CLICK HERE TO SEND YOUR REQUEST TODAY

Alexander Weir is married, with two children together with his wife, and three dynamic go-ahead grandchildren. He lives in a small community in a remote part of Scotland’s Argyll Coast. As part of the community, he teaches art to the children in the community home school and, come evening time, they join him in the family room for ‘story time’. The imagination of the children has been captured in this tale, and author Alexander and his family, are keen to see Archie’s escapades being enjoyed by other children of similar ages too.

He has serialised both books and have been read on Argyll FM radio and covering Ulster, with an outreach across Kintyre, Knapdale, and Northern Ireland. In addition, he has introduced the books to children in Canada and Ireland – and received an enthusiastic response. Alexander is also the Editor of a quarterly Scottish Fellowship of Christian Writers literary magazine, called ‘WordWise’.

Alexander gained his MSc from London South Bank University, and has worked a varied career from Railway Manager, to Missionary, Vice Chairman of Savanne Winery in Tbilisi (Georgia), and Company Secretary, General Manager and Director for two London-based companies. He retired from Business Life in London in 2012.

His writing has not only focused on children’s historical fantasy. Alexander is also author of a peer reviewed medical research paper, and of two theological books, ‘A Question of Time’ and ‘A Question of Identity’. 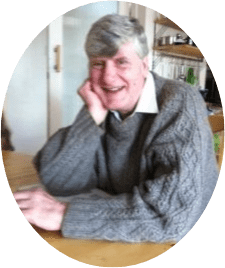