A Matter of Life and Death – Barbara Rogers 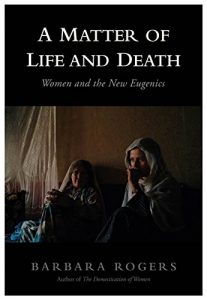 The Cover: A 20-year-old Afghan woman, who is pregnant with her third child in three years, is visiting a female elder after suffering abdominal pain and breathing difficulties. She is afraid for her life because she knows how many other women in her village have died during pregnancy and childbirth. They are not allowed to leave to seek medical help and the elders have little to offer apart from some ineffective traditional remedies. There is no modern contraception, early termination, antenatal or safe maternity care.

“This is inequality and poverty at its most extreme.”

A Matter of Life and Death – Women and the New Eugenics, by Barbara Rogers (Brown Dog Books)

“Dying during pregnancy or childbirth is a terrible reality for many millions of women all over the world.”

Every year in developing countries women have about 89 million unintended pregnancies, estimated at almost half of all pregnancies. Over 200 million women are unable to get safe and effective contraception when they need it.

The lack of contraception, which we take for granted in richer countries, means that the 56 million dangerous abortions are the only means of family planning for those desperate to avoid another birth. These results in over 22,000 deaths and many more permanent injuries.

Would these figures be so easily ignored if it was any other international issue?

Modern eugenics, developed by Nazi racial theorists, is now rife among fundamentalists, racists and nationalists. It aims to suppress women’s ability to choose when to get pregnant, crudely aimed at forcing us to “breed” like animals. Barbara explains:

“Imagine you are a religious extremist or a dictator who wants ‘his’ people to produce more children whether as cannon fodder or voting numbers, in opposition to all others’ rights. You would enforce early marriage, even for children, take away women’s right to refuse sex, and block information and resources for contraception, safe abortion and reproductive health. You would restrict women’s rights and allow, even encourage violence against women if they resist. And you would not care about the health, welfare or even the lives of the women and children you see as your property. That is what we are seeing in many parts of the world today. It is the biggest women’s issue there is.”

If the planet is to sustain us, Barbara argues that it is vital that we all have the means to decide on the right number of children. She asserts that if all babies were planned and wanted, we could achieve a stable and sustainable population and a healthier world. This is also crucial in the fight against poverty.

This is a challenge for the women’s movement worldwide, and also for environmentalists.

Take a look at some of the fantastic Amazon Reviews currently underpinning A Matter of Life and Death:

“What a read! Informative and gripping yet surprising. A must for everyone, everyone should know….”
“A truly fantastic book, full of background information and specific details. Should be compulsory reading for all school teachers and developing agencies all over the world.”
“This is an important book which also puts forward a number of new approaches to the issues. It should be required reading for all those involved in international organisations and economic development.”

This book is truly a matter of Life and Death.

Barbara has written extensively in the past on international and women’s issues, including the classic “The Domestication of Women”. She is now returning to writing after quite a long gap because she understands the urgent need to tackle the issue of women’s choices about having children.