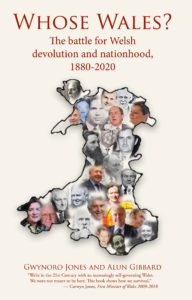 The highly-anticipated Whose Wales? The battle for Welsh devolution and nationhood, 1880-2020 has been released to wide acclaim. At the heart of this comprehensive and unique overview of the devolution battles in Wales lies one question:

So whose Wales is it?

The track record of all four main players, Liberal, Labour, Conservative, and Plaid Cymru, is looked at, from the time of Queen Victoria to these days of devolution and Yes Cymru.

Whose Wales? delves deeper into the degree of ambiguity that runs through Welsh politics that in turn has hindered discussions of a clear Welsh political identity. Can any one party claim to have done more than any other in the fight for securing and then developing Welsh devolution? From one of the leading proponents of the devolution of Wales, former MP Gwynoro Jones, and an award-winning author and former BBC journalist, Alun Gibbard, this all-encompassing, well-illustrated book, Whose Wales? The battle for Welsh devolution and nationhood, 1880-2020, looks at these often-bitter claims and counterclaims. Intriguingly, the authors approach the subject matter from different perspectives. Alun Gibbards’ insightful documenting and analysis complement Gwynoro Jones’ first-hand experience and knowledge in a publication that is unique in both its scope and structure. Whose Wales? is a compelling book for this original analysis. One of the most interesting and turbulent periods in Welsh political history during the 20th century is told by former MP for Carmarthen, Gwynoro Jones, who was one of the two protagonists in three bitter elections in the constituency. He shares the story of the tensions and disagreements between himself and Plaid Cymru’s Gwynfor Evans. He also recounts his years forming the SDP with David Owen, David Steel, Roy Jenkins and Shirley Williams and his involvement in European politics, in the context of devolution.

Well written and comprehensive in its political content and breadth of historic detail, Whose Wales? is constructed into 27 thought-provoking chapters and four distinct sections:

Review Copies of Whose Wales? The battle for Welsh devolution and nationhood, 1880-2020, and interviews with the authors are available on request.

Alun Gibbard and Gwynoro Jones have traced the revival of Wales from the industrializing country of the 1880s and the nonconformist consciousness that led to Sunday closing. They describe the bitter battles over devolution in the 1970s through to the small margin in favour of a Welsh Assembly in 1997 and on to the well-established lawmaking, tax-varying Parliament with solid public support that we see today. We were not meant to be here. This book shows how we survived.’

‘The rhetorical question in the book’s title, Whose Wales? echoes the kind of questions that historians and political commentators have raised over the decades, from Gwyn Alf Williams’ When was Wales? to Dai Smith’s enigmatic question in the title of his book on Welsh politics, Wales! Wales?’ – Professor Sir Deian Hopkin

A video explanation and summary is available here. 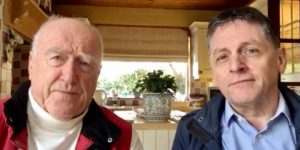