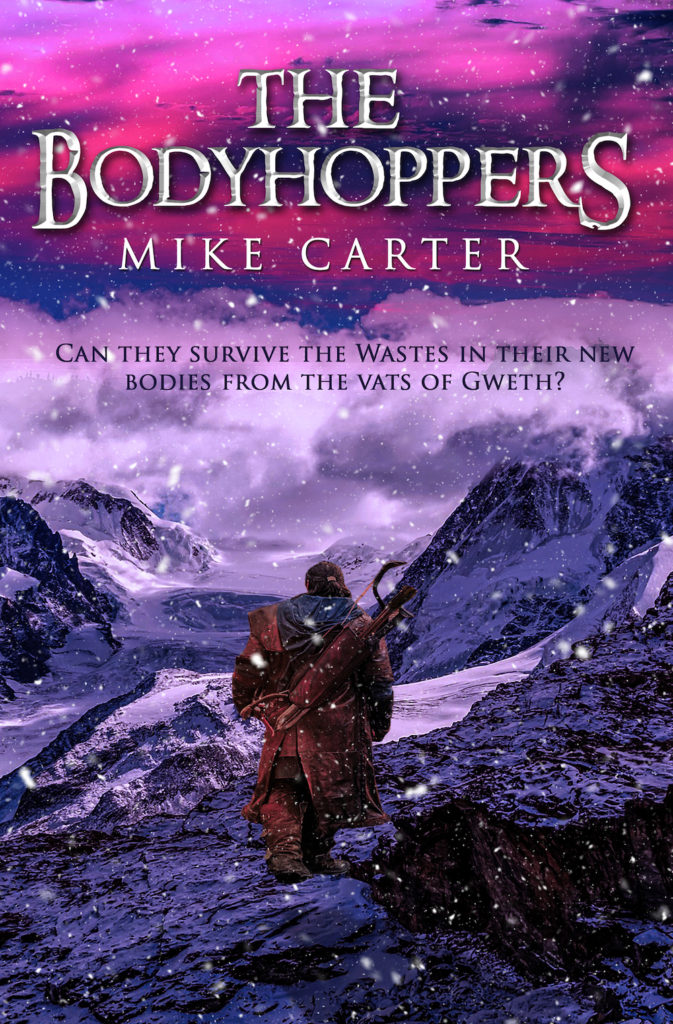 For fans of fantasy and science-fiction genres, The Bodyhoppers by talented author, Mike Carter, is fantastic news.

For Doug Lawrence, a construction engineer, the new telecommunications facility on the remote Indonesian island of Bahala is just another posting. For Dr Julie Foster, travelling halfway across the world to take up a position as site doctor, it is a scary leap into the unknown, an escape from the ordered life of a hospital doctor.

When certain aspects of the construction work and Julie’s position as site doctor don’t really seem to make sense, they find that the installations being built are not what they seem, but are for gateways to two other worlds, parallel to earth but existing in different dimensions.

On one of these worlds, Meerland, Julie and Doug find themselves reluctantly drawn into aiding the gnome-like Meerlanders in their fight against Thaerlons; intelligent, bear-like creatures who come in marauding groups from an icy wasteland to the north. In Gweth, the second world, they encounter an advanced alien society where their consciousness is transferred to other, alien bodies by a process called bodyhopping.

Can they really help the Meerlanders, hampered by their primitive culture? Initially drawn together, their relationship is tested by the stresses and dangers they face and they find themselves wondering what they want for the future.

The Bodyhoppers succeeds on so many levels. The book has a captivating, original and action-packed storyline set against a startling backdrop of parallel worlds. Add to that, there is a rich creative cast of other-worldly characters that are captivating from start to finish. Readers meet the short, medieval Meerlanders who are dressed in military attire to reflect the story’s warring elements:

“Have you ever seen such odd-looking characters? They remind me of garden gnomes,” Doug whispered to Julie, rather louder than he had intended.”

The Sylph-like winged Gwethrins are an equally interesting species and an intelligent, peaceful people with an advanced biotechnology. Meanwhile, the Thaerlons are as fascinating as they are fearsome:

“He knew that somewhere around them was a group of Thaerlons; a huge, bear-like race, covered in white fur, who were far better adapted to these arctic conditions than the Meerlanders.”

Meanwhile, the book’s central humans, Doug and Julie, are just as enthralling. Despite their seemingly straight-laced jobs and softer natures, they have the courage to confront the strange new worlds and people they encounter. As their relationship deepens and evolves, they share alien experiences and an adventurous journey into the unknown. Here, Doug describes Julie:

“As he spoke to her, he could not help noticing her features: a bit of a plain Jane, he thought, something of a straight up-and-down figure, with short cropped brown hair and rather primly dressed, to give her a slightly stern, no-nonsense appearance. But there was something about her that he found attractive.”

Alongside its entertaining dialogue and vibrant descriptions of unique and fantastical creatures, the author brings to life new lands with impressive detail, as this passage reveals:

“Once outside, they could see the structure from which they had just emerged, and it did indeed look like a large gourd, even from the outside. Other gourd buildings of various sizes were situated close by, forming a roughly circular array of domes. The ground between, on which they were standing, seemed to be covered in a mossy type of material, a slightly spongy texture making it pleasant to walk on. But details of this scene were largely lost on Julie and Doug, as their attentions were diverted by the sight of a huge winged dragon standing by one of the domes. It was longer and thinner, more lizard-like than dragons of ancient myths, but was unmistakably a dragon, for all that, stretching almost thirty feet from nose to tail. Its scaly skin shone iridescent bronze in the sunlight, immense wings were folded across its back, and a long, tapering tail was swishing slowly.”

With its original body-hopping concept, creative characters and imaginative context, The Bodyhoppers is a brilliantly descriptive and well-written book – an unmissable treat for Sci-Fi enthusiasts. Advanced Reader Copies of The Bodyhoppers and interviews with the author are available on request. Contact us here for details.

Mike Carter was born in Nottingham, England, where he spent his childhood before moving to Swansea in South Wales to study engineering. He spent many years overseas, living and working in various parts of Africa and South Asia, including Indonesia which provides the initial setting for The Bodyhoppers.

Mike has been an avid reader of fantasy and science fiction novels since he was a schoolboy and enjoys DIY activities as well as the occasional cycle ride and canoe trip. He now lives in South Wales with his wife along with two dogs and two cats who were all rescued from the streets of Dhaka, Bangladesh, by his daughter.